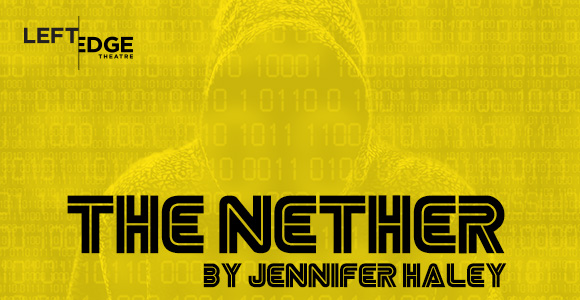 Imagine a virtual world in which you are free to live out your darkest fantasies without repercussion – a perfectly rendered, immersive escape from reality, wherein you can look, speak, and act as you please, your identity securely concealed.

But what makes something real? If a virtual experience has the power to make us think and feel, is it truly artificial? Are our choices ever free from consequence?

By turns philosophical and eerily prophetic, “The Nether” – making its Sonoma County premiere at Left Edge Theatre through March 24th –invites us into such a world, raising these and many other timely questions about morality and culpability in the digital era. But before “logging in,” users be warned: unsettling subject matter is in no short supply here.

We open on a bleak interrogation room at an unspecified time in the future. Detective Morris (Leila Rosa) sits across from a man in old-fashioned clothing with a guarded demeanor. What was once the internet has evolved into the Nether – an immense network of online realms in which students attend virtual schools, employees telecommute to virtual offices, and people like Mr. Sims (Chris Schloemp) log in to indulge their innermost desires.

Sims – or “Papa,” as his avatar is known – is the proprietor of a realm dubbed the Hideaway, an elaborately designed Victorian home conjuring up a hypnotic nostalgia for simpler times past with its ornate furniture and poplar-lined vistas. Visitors can enjoy a stiff drink, dance along to old records on the gramophone, or molest and dismember prepubescent girls.

Morris is determined to shut the Hideaway down and hold Sims accountable for his gruesome crimes – crimes committed, that is, by and against avatars in the Nether. But has anyone really been hurt? Morris presses Hideaway participant Mr. Doyle (David L. Yen) for incriminating details, her own composure slowly crumbling in the process.

We cut between the interrogation room and scenes inside the Hideaway, where we meet Iris (the stellar Lana Spring) – Papa’s favorite little girl – and Mr. Woodnut (Jared N. Wright), an undercover agent sent to gather evidence for Morris’s investigation. Mr. Woodnut has honorable intentions, but soon discovers the lines between personal and professional – as well as virtual and actual – are hard to draw inside this realm. He is bewitched by the Hideaway and all it has to offer, becoming himself a reluctant participant in Papa’s twisted world.

It is evident Director Argo Thompson has chosen his cast with care. Schloemp brings grace and finesse to a difficult role, making Sims remarkably sympathetic given his deviant inclinations. Wright is compelling as the well-meaning detective, grappling with unexpected temptation and fearful self-reflection. Yen delivers a surprisingly heart-rending performance as the reticent and wounded Mr. Doyle. Spring’s Iris is ethereal and deeply felt, adding much to the story’s emotional impact. (It’s important to note that Spring is an adult, and that the worst of what happens is not depicted on-stage.)

Rosa is arguably the only weak link. She doesn’t seem at home in her role, and the opening scenes are a bit awkward because of this. Her behavior may be intentional, however, given what we learn later in the show.

Joe Winkler has set the show to an appropriately ominous soundtrack, from floor-shaking electronic overtures to the crackle and pop of old-timey tunes on Papa’s Victrola. There’s a moment of eerie dissonance near the show’s end when the soundtracks from both worlds collide, as the real and virtual begin to meld.

Act one is weighed down by philosophical quandary and is slow to build momentum. When the pieces begin to fall together, however, the pace accelerates into a second act rich with chilling developments and surprising revelations, and an ending that begs as many questions as it answers.

Though not for the faint-hearted, “The Nether” is a haunting, thought-provoking, and disturbingly relevant ride well worth taking if you can stomach the subject matter. Playwright Jennifer Haley pulls us out of our comfort zone and thrusts us into this dark exploration of a not-so-far-off future that could very well become our own.