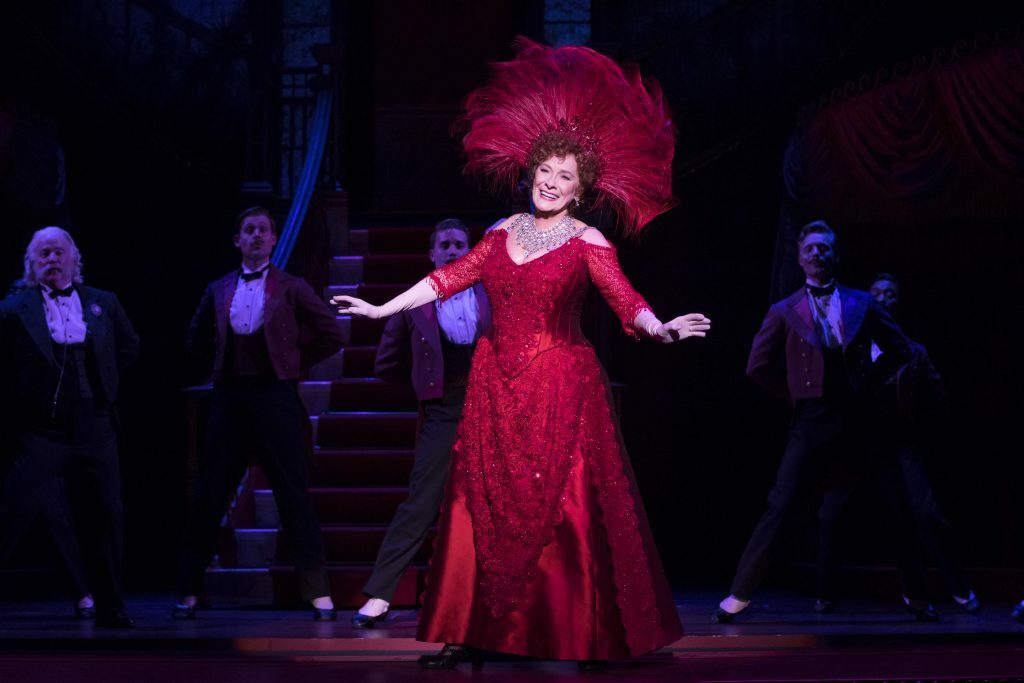 A multiple Tony winner and perennial favorite since its 1964 debut, “Hello, Dolly!” was for decades a star vehicle for recently departed Carol Channing, the performer most associated with the lead role of yenta and all-around advice giver Dolly Gallagher Levi.

The legendary Betty Buckley handles the lead with aplomb in the sumptuous national touring show, at San Francisco’s Golden Gate Theatre through mid-March. In other productions, Dolly has been inhabited by Bette Midler and other top talents. Ms. Buckley manages to make the character her own without referencing any of the other stars that have taken it on, a major achievement in its own right.

…an absolute extravaganza… nearly everything about this show is incredibly good.”

Backed by what appears to be an unlimited budget, the show is one of the biggest spectacles to land in San Francisco in several years. The capacious Golden Gate is its ideal venue. The show is an absolute extravaganza, from stunning backdrops, costumes, and sets to the supreme talents of a huge cast, including Lewis J. Stadlen as Horace Vandergelder, the wealthy merchant and target of Dolly’s matrimonial intentions. Among the secondary cast, Nic Rouleau is a standout as the lovelorn Cornelius Hackl, one of Vandergelden’s underpaid and underappreciated employees.

As townspeople, waiters, and other characters, approximately 30 performers do everything from simple walk-on bits to astoundingly athletic dance numbers—all of it appearing nearly effortless, and the show moves along with grace, precision, and enormous energy. There are no weak links in this production—in fact, the only weak link, and it’s a stretch to say this, may be Ms. Buckley herself, because nearly everything about this show is incredibly good. If she’s the weak link, it’s a strong, supple one.

“Hello, Dolly!” is a lightweight musical set around the turn of the 19th century, with some great songs in mid-20th century style—not merely the title song, but others including the heart-rending “Before the Parade Passes By.” Adhering to a time-honored plot device of the matrimonially-minded seeking partners with money, the show has been unfairly criticized for lacking relevance to modern audiences—sold-out performances at the thousand-seat Golden Gate to the contrary. If you have a hankering for a classic Broadway musical the way it was intended to be seen, this is the show for you.