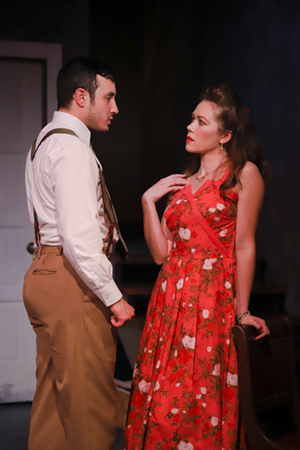 Trouble brews as a flighty heiress cavorts with her head servant in “After Miss Julie,” Patrick Marber’s adaptation of the August Strindberg classic, at Main Stage West through March 3.

Reset in an English country manor at the close of World War II, with the Labor Party about to win the national election and disrupt traditional social structures, the play features Jennifer Coté as Christine, a loyal scullery maid; Sam Coughlin as John, her fiancé and the manor’s head servant; and Ilana Niernberger as Miss Julie, the heiress who can’t resist defying class restrictions by seducing him. All the action plays out in the manor’s cramped downstairs kitchen, while a wild celebration swirls about outside.

Jointly directed by Elizabeth Craven and David Lear, who also did the set design, this brilliantly staged and performed piece is the antidote to the poison that is Strindberg’s much-praised “Creditors,” extended to March 3 at Berkeley’s Aurora Theatre Company. Both plays were written in 1888, and both are about the power dynamic inherent in sexual triangles—strong superficial resemblances, but “After Miss Julie” actually has uplifting moments and an ambiguous ending that proves to be far more nuanced and far more satisfying than the abrupt finality of “Creditors.”

…a stunning, perfectly paced pas de deux… that will keep you on edge right to the end…”

Coté is excellent in her role as the determined, hard-working Christine, while Coughlin and Niernberger are astounding in their portrayal of a pair of hopelessly attracted lovers deep in the throes of an intractable dominant/submissive relationship. Julie relishes lording it over John, issuing orders that as her lover and employee he must obey. She then immediately demands that he issue orders to her in return and he complies, despite knowing how wrong it all is. With class distinctions amplified by differences in dialect, it’s a stunning, perfectly paced pas de deux—quite literally, with white-hot choreography by Dana Seghesio—that will keep you on edge right to the end, and will give you plenty to ponder for days after.

Sound designer Matthew Eben Jones has selected some wonderful music from the WWII era that perfectly establishes the play’s time frame, and Missy Weaver’s moody subdued lighting works marvelously to reinforce every scene. Running time is about 90 minutes. Opening night featured a short intermission; it wasn’t clear if MSW would keep it or not for the duration of the show. In either case it’s a fantastically good production, among the best in a series of superb productions by Sebastopol’s quirky troupe. In its few short years, Main Stage West has become one of the North Bay’s leading theatre companies. “After Miss Julie” proves why.