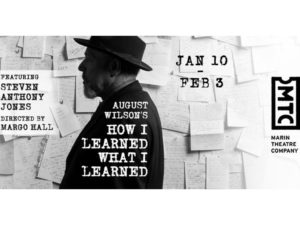 Pulitzer Prize-winning playwright and national treasure August Wilson was taken from us too soon, in 2005 at 60 years of age. A self-taught high school dropout who authored dozens of plays—among them, “Fences,” “Gem of the Ocean,” “Ma Rainey’s Black Bottom,” “Jitney,” and “Joe Turner’s Come and Gone”—the prolific Wilson accumulated many honors and awards. What he might have achieved had he lived longer is the stuff of speculation, but what he accomplished is astounding, the real meaning of “a lasting legacy.”

Anchored in Wilson’s upbringing in Pittsburgh’s Hill District, the performance is a seamless blend of reminiscence, historical fact, observation, and sermon, much of it a mix of personal anecdotes that range from exceedingly tender—a grade-school epiphany when he kisses the girl of his dreams—to absolutely horrific. He was a close-up witness of a murder provoked by an insult.

Jones’s monologue covers an astounding amount of time and material—from Wilson’s childhood in Pittsburgh to his adult years in St. Paul and Seattle—all of it conveyed with insightful wit and the intimate, avuncular wisdom of a wily old preacher.

A cooperative production with the Lorraine Hansberry Theatre and the Ubuntu Theater Project—the show moves sequentially to those two venues when it leaves MTC—“How I Learned What I Learned” is a couple of the most rewarding hours you’re likely to have in a theater this year.