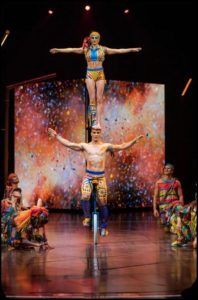 Calling a Cirque du Soleil production “a spectacle” is a bit like calling the Grand Canyon “a big ravine.” Reviewers’ standard superlatives—“tremendous,” “incredible,” “fantastic,” etc—fall far short of describing the scope of talents and risks taken in a typical Cirque show.

“Volta” is the 19th Cirque production to visit San Francisco. At AT&T Park through February 3, the show follows company protocol in avoiding the use and exploitation of animals, but once it gets underway no one in the audience will care that there’s nary a lion or tiger in sight. The dramatic setup is a loosely-organized talent competition—the “Mr. Wow Show”—that somewhat spoofs TV programs such as “America’s Got Talent.”

The talent-show thread gets inexplicably lost somewhere before intermission. No problem: the assorted acts that make up “Volta” are so amazing that there’s no need for dramatic structure. World-class acrobats, tumblers, trampolinists, BMX cyclists, ballet dancers, and more rollout onto the large stage in succession so rapid that at times several acts overlap one another. 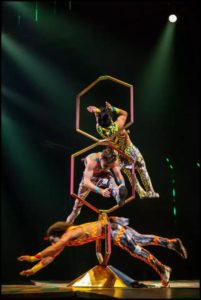 It’s been noted that Cirque du Soleil is where former college gymnasts go to extend their careers. Their abilities and confidence pay homage to long years of training. It’s easy to understand how someone becomes an expert on the unicycle or the trampoline, but there is one act in “Volta” that provokes bafflement: Where does one learn to be a hair suspension aerialist? In “Mirage,” Brazil’s Danila Bim does a riveting aerial dance far above the stage floor, suspended only by her hair, pulled up into a tight braid connected to a cable in the apex of the big top. Her act isn’t the most dynamic—the trampolinists, tumblers, and stunt cyclists have the edge there—but it’s certainly the most beautiful and the most exotic. A perfect blend of intention, strength, and serenity, “Mirage” is ideally positioned as the high point of Act 2.

Traditional circus arts aren’t ignored in “Volta”—there is plenty of clowning, although never a small car unpacking two dozen unseen passengers. The audience also gets to see a scary performance on the “Swiss rings”—a swinging version of the still rings in men’s gymnastics. Also called the “flying rings,” the apparatus was once part of Olympic competition and now has very few adherents outside the circus. Keep an eye on the catwalk from which the rings are suspended. It sways quite a bit when the performers swing out over the edge of the stage. 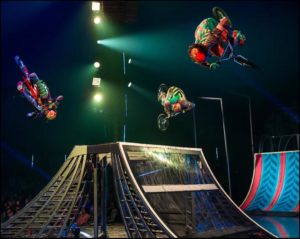 There are many close calls in “Volta,” particularly in the closing segment with what seems like a dozen bike riders performing tricks simultaneously. The danger is part of the thrill for the audience—and presumably, part of the appeal for the performers—but given its seemingly high potential for disaster, Cirque du Soleil has a low injury rate. “Volta” is a show with appeal for everyone who appreciates the extremes that humans can achieve even if for no higher purpose than sheer exhilaration and the satisfaction of knowing that they can do things that few others can equal.

“Volta” runs through February 3 in San Francisco, then moves to San Jose through March 24. It’s an astounding production. With two shows per day on many dates, there is certainly one that will fit in your busy winter holiday schedule. Don’t miss it.

ASR Theatre Section Editor and Senior Contributor Barry Willis is a member of the American Theatre Critics Association and president of the SF Bay Area Theatre Critics Circle. Contact him at barry.m.willis@gmail.com.