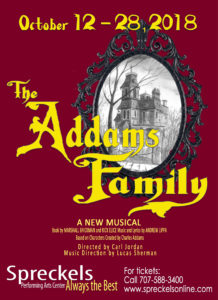 Charles Addams’s “altogether spooky” Addams Family has been deeply ingrained in American culture since the debut of the 1960s television sitcom—so deeply ingrained and so successful that it spawned an imitator TV series (“The Munsters”), at least two movies, and at least one musical. A tremendous version of this last venture runs through October 28 at Spreckels Performing Arts Center in Rohnert Park.

In the musical, the family—Gomez, Morticia, Uncle Fester, Grandma, Pugsley, and their butler Lurch—are all as we recall them, but daughter Wednesday (Emma LeFever) has become a cranky self-directed teenager. Worse, she has fallen for a straight, normal boy, much to the dismay and disapproval of her family. This classic setup-with-a-twist is rife with conflict, exploited to the max in every scene, song, and dance.

“Addams Family, a New Musical” is a dazzling bit of theater.

Director Carl Jordan gets wonderful performances from the large cast, especially from Peter T. Downey as irrepressible patriarch Gomez, and from Serena Elize Flores as his slinky seductive wife Mortica. The frenetic Erik Weiss is his over-the-top best as Uncle Fester, also serving as the show’s narrator.

Mario Herrera is a total surprise as Pugsley, Wednesday’s withdrawn younger brother. Herrera stuns when he steps out of the shadows for his big solo song. Cooper Bennet gives a very natural and sympathetic interpretation of the character of Lucas Beineke, Wednesday’s boyfriend. Larry Williams and Morgan Harrington are equally good as his parents Mal and Alice, with a couple of breakout moments of musical comedy.

Elizabeth Bazzano’s and Eddy Hansen’s gorgeously ornate set occupies the entirety of the big stage, matched in its aspirations by Pamela J. Johnson’s costumes and Michella Snider’s choreography. In the cast are also a dozen or so “ancestors” (as they are called in the program)—a chorus of extras who embody spirits and other unworldly creatures associated with the Addams. They’re all very effective and mostly delightful to watch.

Lucas Sherman’s superb eleven-piece orchestra drives the show, most of it conveyed by beautifully delivered song.

The core conflict — Will Gomez and Mortica accept Wednesday’s love for a boy from the wrong side of the graveyard? — carries the first act aloft. It’s like watching a magnificent hot-air balloon rise to a great height—imagine the penultimate scene in “The Wizard of Oz”—while the second act is like watching that same balloon settle slowly back to earth, a rise-and-fall written into the script. Even if the ultimate settling doesn’t make you leave the theater with a song in your heart, in total “Addams Family, a New Musical” is a dazzling bit of theater.