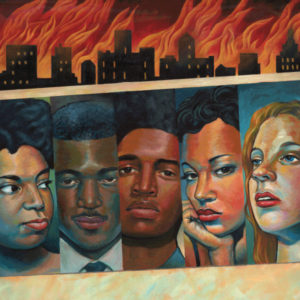 Berkeley’s Aurora Theatre Company has yet another winner on its hands with playwright Dominique Morisseau’s “Detroit ’67,” extended through October 7.

A sad, sweet, and thought-provoking story set in Detroit during the riots and fires that engulfed that city in 1967, the Darryl V. Jones-directed play centers on sister and brother Chelle and Lank (Halili Knox and Rafael Jordan, respectively), who share a home left to them by hard-working parents.

As a way of earning extra money, they host dance parties in their basement, beautifully realized by scenic designer Richard Olmstead. The entire affair plays out in this basement, but the turmoil outside is almost constantly apparent. Much to Chelle’s annoyance, Lank has bigger plans than neighborhood parties. He wants to buy a bar in partnership with his friend Sly (Myers Clark), a desire thwarted at every turn by missed opportunities, bureaucratic obstacles, and brutal police. Chelle’s friend Bunny (Akilah A. Walker) spends plenty of time hanging out in the basement, dancing, flirting, and offering acerbic commentary on everything that transpires.

This perfectly-paced show is an exemplar of superb ensemble work…

Into the mix comes Caroline (Emily Radosevich), a white girl found wandering in the streets by Lank and Sly. She’s suffered a beating, and they let her recover in the basement, but her presence during incendiary racial circumstances raises the danger for all of them. Over the course of a few days, Chelle and Lank work to resolve their differences, Lank and Sly almost succeed with their business plan, and Caroline more-or-less recovers. The beautiful and flirtatious Bunny doesn’t contribute much to the advancement of the plot, but instead serves as an audience point-of-view character who anchors every scene she’s in.

“Detroit ‘67” has been unfairly criticized for lacking original plot elements. To that, one might counter that there are precious few original plots—in fact, some script gurus insist that there are only a handful. Certainly, there’s plenty of familiarity in sibling disagreement and in two guys trying to start a business under adverse circumstances.

While the script could use a judicious edit, it’s totally believable, and gorgeously presented. This perfectly-paced show is an exemplar of superb ensemble work, plus some astounding sound design by Cliff Caruthers. There are moments of heartbreaking beauty—in particular, the closing scene where Chelle dances to a favorite Motown hit as the lights slowly fade. Live drama doesn’t get any more evocative than that.