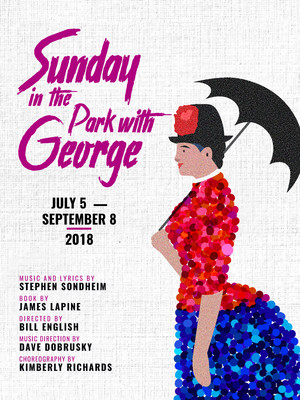 Every summer, San Francisco Playhouse puts on a classic musical that runs from late June or early July into September. A hugely successful business model, the strategy takes advantage of tourist traffic in the city’s downtown Union Square area.

The current offering, James Lapine’s and Stephen Sondheim’s “Sunday in the Park with George” has been so successful that the Playhouse has had to add performances to accommodate demand.  Now halfway through its run, the show is popular for good reasons—among them, superb performances and stunning stagecraft.

In many ways award-winning director Bill English’s magnum opus, “Sunday in the Park” has amazing sets (also by English) and immersive projections by Theodore J.H. Hulsker that bring the paintings of George Seurat to life, as well as the island in the Seine immortalized in his most famous creation.

The first act’s story focuses on Seurat (John Bambery) and his obsession with 18th century discoveries in optics—in particular, the fact that two closely-spaced unlike colors seen at a distance appear to the eye as a third color. Red and blue appear as lavender, for example.

His pointillist technique was enormously time-consuming, leaving little margin for the proper treatment of his lover/model/muse Dot (Nanci Zoppi, who steals the show).  Zoppi also appears in the second act as Marie, Dot’s daughter, and Bambery is Seurat’s American grandson, also named George, and also an artist. There is some disagreement between Marie and this new George about his exact lineage, and about the direction of his art. The second act spoofs the 1970s art world, but the first act seems to take the artist’s struggle quite seriously.

There are no weak links in the large cast—they range from good to exemplary—but standouts include Maureen McVerry as the Old Lady in Act 1 and as modern art maven Blair Daniels in Act 2, and Anthony Rollins-Mullens as Louis.

“Sunday in the Park” is an absolute spectacle. Sondheim’s music may give some visitors pause—it rarely rises to the level of recognizable melody, and unfortunately, the composer may have exhausted his considerable lyrical abilities in collaborating with Leonard Bernstein on “West Side Story.”

From the same era that gave us “Company” and “Sweeney Todd,” this show tends toward the atonal and repetitive, but it’s nonetheless a  beautifully rendered and performed Broadway classic that deserves all the attention it’s getting.