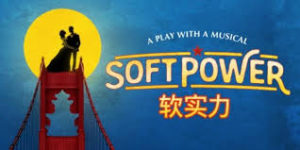 China is clearly on its way toward being the dominant economic force in the 21st century. Its cultural influence isn’t yet on par with its industrial and financial power, but there seems little doubt that its ascendency is inevitable. Directed by Leigh Silverman, the fantastically entertaining “Soft Power” imagines a near future when Chinese film, TV, and theater borrow heavily and indiscriminately from standard tropes of 20th-century American popular culture. The title is code for a nation’s global cultural influence.

Hwang opens the piece with a meeting between himself (played by Francis Hue), a successful screenwriter, and Xue Xing (Conrad Ricamora), an executive with “Dragon Media” sent to Hollywood to recruit talent for productions for the Chinese domestic market. Xing’s comprehension of English is excellent but he needs help with idioms and cultural details. His slight Chinese accent gradually disappears as the story moves forward in time, an indication that he’s become fully assimilated.

A classic Hollywood trope involves his much younger starlet girlfriend Zoe (Alyse Alan Louis, a fantastically talented singer who also does a superb impression of Hillary Clinton in one of the core story’s many tangents.)

The ambitious but somewhat out-of-control script covers everything from America’s love affair with firearms to the venomous 2016 presidential election and its aftermath to typical American/European stereotypes of Asians in such beloved shows as “The King and I” and similar huge-scale theatrical productions.

Sam Pinkleton’s choreography is especially delicious, riffing on classics like “Billy the Kid” and “Oklahoma.” Watching nearly two dozen mostly Asian performers hamming it up in blonde wigs and mid-South accents is a scream.

The script leaps forward to a televised discussion among Chinese cultural intellectuals about the “invention of new theatrical forms” combining speech, song, and dance. Stagecraft is superb, immersive, and at times almost overwhelming.

This is a hilarious must-see production for anyone interested in the future, in the abysmal state of American politics or in an alternate take on the stupidly contentious issue of cultural appropriation. Should Anglo women be driven out of business for making and selling tacos and burritos? Is it fair that white college girls get harassed by their Hispanic sisters for wearing hoop earrings? These questions aren’t hypothetical; both have happened recently.

The bottom line is that humans copy everything they like—food, fashion, music, art, language, technology. “Soft Power” is a wildly entertaining celebration of this eternal truth. It’s a genius production whose short three-week run does it an unintentional  disservice.