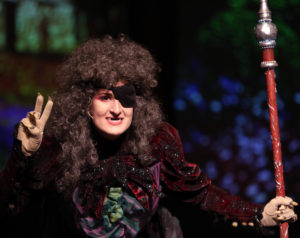 Santa Rosa Junior College’s production of beloved musical “Into the Woods,” running through May 6th at the Maria Carrillo High School Theatre, enchants audiences with an imaginative mash-up of famous fairy tale figures set to witty tunes by Stephen Sondheim.

Thanks to the curse of a hideous witch (Alanna Weatherby), a baker and his wife (Brett Mollard and Katie Smith) are unable to have the child they so desperately desire. To break the hex, they must venture into the woods to find four ingredients the witch needs to brew a special potion. Their paths soon cross with classic characters like Little Red Riding Hood (Serena Poggi), Cinderella (Ella Park), Rapunzel (Shayla Nordby), and Jack (Levi Sterling), each on a quest of their own.

The first act is fast-paced, funny, and feel-good, wrapping up neatly with the promise of ‘happily ever after.’ In the second chapter, however, all hope for a fairy-tale ending is quickly – and quite literally – crushed. The pace slows and the comedy wanes as we are forced to confront harsh realities in the ‘ever after.’ As our characters soon learn the hard way, getting what we think we want doesn’t always pan out the way we hope it will.

SRJC has assembled an energetic and enthusiastic cast, whose efforts transcended the distraction of some unfortunate technical difficulties at the opening night performance. Smith brings a charming candor and sense of comedic timing to the role of Baker’s Wife, and Mollard aptly matches her charisma. Their convincing banter propels the plot and keeps the laughter coming. Background characters add much to the amusement, too, manifesting as curious rabbits and cleverly-clad deer among other accessory roles. Siobhan Aida O’Reilly delivers a standout performance as Jack’s beloved cow, Milky-White, who at times steals the show with her expressive gestures and winning mannerisms. Victor Santoyo Cruz is hilarious in brief appearances as Hen and Dwarf.

Music drives much of the story’s action, and while Sondheim’s lyrics are sharp and entertaining, the songs often struggle to find their melody. On the whole this troupe rises to the challenge, with noteworthy vocal performances by Weatherby and Cooper Bennett (Cinderella’s Prince not-so-charming). The actors are accompanied by a live off-stage orchestra. 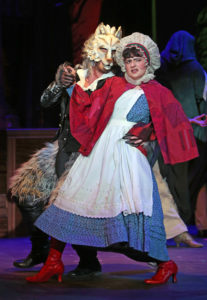 This production is a feast for the eyes thanks to Maryanne Scozzari’s creative, quirky costumes and Peter Crompton’s elaborate and absorbing set, evoking the magic and opulence of grand libraries past. Books act as fluttering birds and rolling shelves transform into horses. Papier-mâché masks are made from pages lined with text, and kitchen gloves become cow udders. Rather than detracting from the action, the visuals are impactful and effectively enhance the story.

Clocking in at around two and a half hours, “Into the Woods” makes for a long but enjoyable night at the theater, and remains family-friendly despite the darker turn things take in Act II.

2.5 hours, with one 15-minute intermission

Recommended for ages 12 and above

Rating: Three-and-a-half out of Five Stars