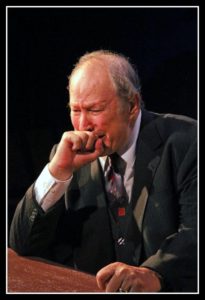 Facing constant debt and a crumbling career, Willy’s life is held together only by the loyalty of long-suffering wife Linda (Sheila Lichirie) and generosity of best friend Charley (Al Kaplan). A lifetime of blind idealism and pride has cost him not only the realization of his ‘American Dream,’ but has poisoned his relationship with eldest son and former high school star athlete Biff (Edward McCloud), who, for reasons revealed in a series of painful flashbacks, could not live up to his father’s lofty expectations. Willy’s life unravels before our eyes as we watch him oscillate between outbursts of anger and frustration, succumb to confusion and helplessness, and grasp at the remaining shreds of misguided optimism that had once propelled him forward.

Most of the action occurs at the Loman family’s rundown home, now overshadowed by the towering apartment buildings of Brooklyn’s increasingly crowded skyline. Its drab furnishings and perpetually breaking-down appliances serve as a fitting backdrop for the deteriorating dreams of its inhabitants. This hits home during some of Willy’s eruptions. (“Once in my life I would like to own something outright before it’s broken! ….you pay mortgage for 10 years and more and by the time it’s actually yours, you’re old and so is the house.”) Artistic Director Craig A. Miller and Technical Director Conor Woods have designed a clever set which fluidly transforms into offices, hotel rooms, and restaurants throughout the show.

In the ever-evolving landscape of advancing technology and planned obsolescence, Willy Loman is the enduring portrait of a discarded worker. It is a profoundly relevant story still today, and the cast and crew at 6th Street Playhouse have more than done it justice. Siebert adds another accomplishment to his already impressive resume with a truly first-rate performance, paying homage to Miller’s protagonist in all of his complexities. His dynamic energy is well matched by a capable cast, with notable performances by Lichirie as the admirably patient and pitiable Linda, McCloud as golden-child-turned-black-sheep Biff, and Ariel Zuckerman as younger brother Happy, following in the overly-eager and naïve footsteps of his ailing father. Supporting roles are superbly acted, too, and the result is a cohesive and emotionally impactful experience audiences will not soon forget.

“Death of a Salesman” by Arthur Miller