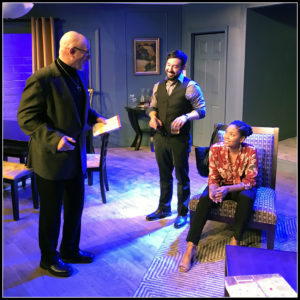 A celebratory dinner party goes horribly awry in Ayad Akhtar’s “Disgraced,” at Left Edge Theatre in Santa Rosa, through February 18. In it, ostensibly upscale intelligent people provoke each other just enough to reveal ancient ethnic hatreds lurking just beneath the veneer of civility.

The controversial script won the 2013 Pulitzer Prize for drama. Tightly directed by Phoebe Moyer, who in her director’s notes mentions having felt “uncomfortable, frightened, and ultimately moved,” when she first read it, the play explores interconnected contemporary issues of, as Moyer puts it, “religion, capitalism, tribalism, race, tradition, infidelity, loyalty, politics, and the role of the artist” with amazing efficiency thanks to Akhtar’s authorial elegance and the cast’s tremendous ensemble work.

Ilana Niernberger stars as Emily, an artist whose work has begun to appropriate Islamic imagery. Her partner Amir (Jared N. Wright) is a hard-working lawyer seeking to make partner in his law firm, but held back by the Indian/Pakistani ethnicity he has long tried to minimize. Amir’s nephew (Adrian Causor) has gone so far in rejecting his Islamic roots that he’s legally changed his name to “Abe Jensen,” explaining to his uncle that by doing so he has almost completely eliminated feeling any sort of discrimination. Mike Shaeffer plays a self-important art curator named Isaac, planning a big exhibit of artists exploring various spiritual traditions. Jory (Jazmine Pierce), his young wife or girlfriend—it’s not clear which—is a lawyer in Amir’s firm, a fact that late in the play drives home the final nail in the coffin of Amir’s professional aspirations.

A bubbling cauldron of complex relationships and thorny issues, “Disgraced” is one of the most dynamic and relevant plays to appear in the North Bay in many months. There is not a moment or gesture wasted in its quick-moving ninety minutes. The acting is as stunning as the script is provocative. The whole affair will leave you gasping for breath at its sheer intellectual and artistic intensity.

“Disgraced” is one of the most compelling scripts to come along in a very long time. The Left Edge production is its perfect realization. Don’t be surprised, if days later, you’re still pondering what it plants in you. That’s the intent of the playwright, director, and cast, and they all succeed beautifully.

Barry Willis is a Senior Editor/Writer for Aisle Seat Review, and a member of the American Theatre Critics Association (ATCA) and president of the San Francisco Bay Area Theatre Critics Circle (SFBATCC).

Rating: Five out of five stars.