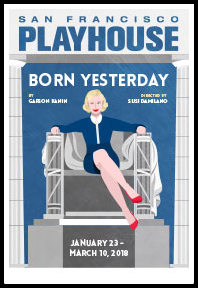 Note: These commentaries are primarily focused on the production, direction, and technical aspects of theater and performing arts.

Set in a $235-a-day hotel suite in our nation’s capital after WWII, “Born Yesterday” revolves around one Harry Brock, a self-made scrap-metal tycoon-cum-moneybags who comes to D.C. to buy himself a U.S. Senator. Along the way, he also buys (or so he thinks) a New Republic reporter named Paul Verrall to teach culture and manners to his mistress of eight-plus years, Emma “Billie” Dawn, a mink coat wearing former hoofer from the “Anything Goes” chorus line.

Simple enough. But as they often do in D.C., things go awry.

Because as Billie and Paul (quite quickly and with very little ramp-up) bookworm their way towards a romance, Billie morphs into the best looking, best educated dancer-cum-librarian in these forty-eight states (remember: the play takes place in 1946.)

She also turns a now knowing eye towards the ways Harry has been using/treating her – particularly as a “silent partner”, who, it turns out, owns 160 of what-were-Harry’s-but-are-now-Billie’s junkyards, since Harry insisted that she rather than he sign all the ownership documents (mostly unread.)

To Harry’s horror, Paul’s new student turns into a polished (as opposed to unpolished) dumb blonde, a well-read whistle-blowing crusader-cum-moralist who is in love with said reporter-tutor and not the least bit adverse to some not-so-subtle brink-womanship/blackmail regarding said scrapyards.

Next thing you know, love wins triumphant for Billie and her new beau while Harry has (we’re left to hope) learned his lesson(s) and is licking the wounds of his comeuppance. Curtain calls all around.

There are two flies in the ointment of the SF Playhouse production. As a character, Harry is a bully, a shark who is used to getting his way even if it involves slapping a few people around. That’s a given; no doubt. But, and it’s a BIG but, this play is written as a light comedy and the actor portraying Mr. Brock presents his character as a totally unlikeable, snarling woman (and man) beater. And since he’s such an obvious boob, no self-respecting graft-oriented Senator would get within strongarm (or bank deposit slip) distance of this walking Grand Jury deposition. So, if there is nothing at all likeable about Harry, we’re left with two holes in the plot:

Absent those two points, we’re left with a morality play.

Scenic Design:
SF Playhouse is known for nice sets. This one is, in a word, fabulous. Multi-layered, including a 2 or 3 story window with rear projection of The Mall in Washington, D.C., this is a set among sets. Major marks to Scenic Designer Jacquelyn Scott. Special nod to Projections Designer Theodore J.H. Hulsker. (Score: 9.5/10)

Sound:
The show doesn’t have an especially large sound cue list, but all of the ever-present Mr. Hulsker’s sounds were executed and voiced well. (Score: 9/10)

Props:
Speaking of omni-present, Ms. Scott of Scenic Design fame also serves as Properties Manager for this production and did yeowoman’s work on this front as well. The furniture was tasteful, the props as period as possible it appeared. (Score: 9/10)

Costumes:
Mid- 20th century (1946) is always a tricky ask of any costumer. Abra Berman took a mighty swing and darn near got all the costumes right. A couple of outfits looked more ‘50s than mid-‘40s, but still a solid job. (Score: 8/10)

Direction:
Susi Damilano knows directing cold. Let’s get that straight right off. She’s a top-flight director. And, comedy – any comedy, anywhere, anytime, in any theater – is hard to direct. Period.

As seen, this show did not represent Ms. Damilano’s very best. Pacing was a solid beat too slow in Act 1 and missed by more in Act 2. Character arcs were left too flat and we missed-out on the comedic payoff of Mr. Brock’s comeuppance (mentioned above.)

To be fair, 1940’s words-and-phrases require more work on the part of actors and directors. Characters of this period often spoke sotto voce, or out of the side of their mouth. (Think Cary Grant, Abner Bieberman, Rosalind Russell, and Ralph Bellamy in “His Girl Friday”.) These were well trained radio actors who knew how to nuance each line they delivered.

On a related note, actors in this show too often spoke both too soft and off-axis from the audience, making it difficult to hear the lines and the jokes. Vocal projection, from these sorts of characters and with this sort of material, is to be expected. When an audience works to hear or to decipher a line (or ‘accent’) jokes die.

Ditto when line speed slows down. Comedy, especially of this period, needs to be tight, crisp, and rat-a-tat fast. (Score: 8/10)

Lighting:
By and large, Michael Oesch’s lighting design for this show was good. In particular, the upstairs lighting and that of the entryway was very well conceived and executed. That said, there were noticeable gaps between the lights set for downstage. At this production level, the audience should not see a dim zone between lights. (Score: 8/10)

Casting:
Casting by Lauren English and Bebe La Grua was mostly fine, with two notable exceptions: the actors selected to portray Mr. Brock and and Mr. Verrall. Both were too ‘one note.’ On the other hand, Ms. Millie Brooks is delightful actress. (Score: 8/10)

So, excepting a couple of infield ground balls, (which, to be fair, can largely be addressed) this show has the potential to be the sort of solid inside-the-park home-run production we’re used to from SF Playhouse. (Score: 8.5/10) 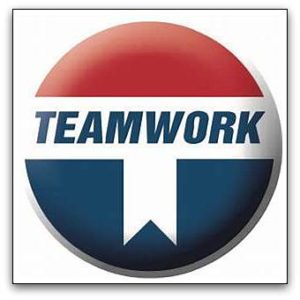