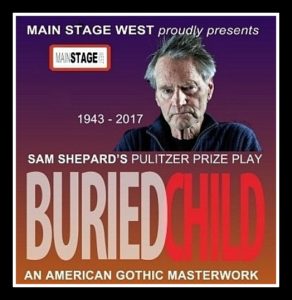 Be glad that the prolific Sam Shepard worked out his issues through writing rather than by spraying a shopping mall with an automatic weapon. His stuff is as dark and forbidding as a cemetery on a cold December night.

Ably directed by Elizabeth Craven, “Buried Child,” at Main Stage West in Sebastopol through February 25, is a baffling portrait of the ultimate dysfunctional family. Set in an Illinois farmhouse, it opens with a cantankerous exchange between family patriarch Dodge (John Craven) and his unseen harridan wife Halie (Laura Jorgensen), whose shouted responses intermittently remind him of God’s bounty and the mercies of Jesus. Dodge is in ill health, unable to rise from the ratty sofa on which he lies, but is sufficiently motivated to nip from a hidden bottle, smoke one cigarette after another, and ramble on semi-coherently.

Enter Tilden (Keith Baker), a monosyllabic moron, with an armload of freshly picked corn. He’s presumably the son of Dodge and Halie, although that’s never made explicit, as is Bradley (Eric Burke), another developmentally challenged offspring with a missing leg. Bradley does a savage job of cutting his sleeping father’s hair then spends the remainder of his time onstage hiding under blankets and spouting argumentative comments. At some point a younger member of the clan shows up: Vince (Sam Coughlin). None of his relatives recognize or acknowledge him even though he repeatedly badgers them to do so. Vince’s girlfriend Shelly (Ivy Rose Miller) is the only one who’s rational enough to begin to make sense of what’s going on, but as the audience’s point-of-view character, she’s as mystified as we are.

Vince leaves for a couple of days. Nobody notices. Tilden harvests fresh carrots from the presumably fallow farm. Halie appears with local minister Father Dewis (Dwayne Stincelli) in tow, the two of them sharing a flask and apparently in the full flower of a forbidden affair. There are some erratic tangential comments about proper Christian behavior. Vince returns, drunk and raging. The family argues about another son who may or may not have been real. Dodge reveals a long-suppressed secret. Shelly leaves. The end.

There’s not a clue in any of this as to what it’s all about, other than the meanness and arbitrary meaninglessness of life, and bottomless darkness lurking beneath the surface. Imagine American redneck angst scrutinized by Pinter or Beckett.

The playbill puts the script’s time at 1978, but it feels much earlier—the 1930s or ’50s perhaps. The disjointed storyline isn’t far from an episode of the Cartoon Network’s “Squidbillies;” the aesthetic is right out of “The Twilight Zone.”

“Buried Child” is solidly presented by a cast of talented veteran actors, and at the very least is damned interesting even if we learn nothing—a theatrical curiosity, if you will.

Some theatergoers may even interpret it as comedy. At slightly under two hours running time it won’t make you wish you had somewhere else to be. Just don’t expect to come away with new insight or understanding about rural life or family dynamics. You won’t, other than having experienced, as the director’s notes remind us, an authentic modern American classic.

Barry Willis is a Senior Writer/Editor for Aisle Seat Review. He is also a member of the American Theatre Critics Association and president of the San Francisco Bay Area Theatre Critics Circle.

Rating: Three-and-a-half out of five stars.