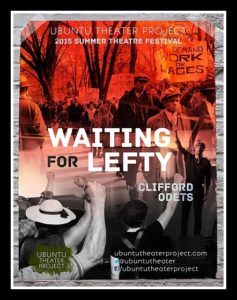 Clifford Odets was one of the most skilled playwrights of 1930s American social protest. For those who can leave their political leanings at the coat check when entering the theater, his writing is spare, almost terse, and highly instructive of the period. His characters are powerful and symbolic without stooping to sentimentality or cliché. And his staging devices are imaginative yet simple without being simplistic. His works have a timelessness so they can be staged in many settings and styles without losing their impact. Mr. Odets’ plays are dramatic representations of blue collar life in the 1930 that are socially, historically, and dramatically authentic and important.

Born in Philadelphia in 1906, Odets grew-up in the Bronx, New York, the very definition of working-class America. Attracted to the theater, Mr. Odets joined the Group Theatre in 1931 where he wrote his six best and most famous plays: Golden Boy, Rocket to the Moon, Paradise Lost, Awake and Sing!, Till the Day I Die, and the first play of Odets to be produced, Waiting for Lefty, arguably one of the most celebrated and significant plays of twentieth century American theatre. Mr. Odets’ dramatizations of the common workingman’s struggle in his time paved the way for the works of Arthur Miller, William Inge, and Tennessee Williams.

If you like your theater understated and enjoy teasing the significance, meaning, or connotation out of this-or-that character’s lines, then Odets is not your playwright, and Waiting for Lefty is not your play. This is politically left, workingman theater delivered with the sweet subtlety of brass knuckles driven by a large muscular man descending from his well-worn, roughly hewn soapbox.

The essence of Waiting for Lefty is that unions and collective bargaining are the only ways for the American workingman to gain any kind of footing against big business. Absent those tools, owners and their cronies can—and will—continually drive down wages and suppress the means necessary for these same workers to do a decent day’s work.  As a result, the working classes need to fight like junkyard dogs for their rights, particularly to unionize.

This production of Waiting for Lefty by the Ubuntu Theater Project (UTP), converts an actual Berkeley, CA, automobile body-and-fender repair shop into a theatre space. Directors Emile Whelan and Michael S. Moran stayed true to Odets stage direction by having actors mixed-in among the audience, seated on crates around the make-shift stage—an open circle of stained concrete floor. The staging— grounded in the rigid industrial sights, unexpected smells, and hard-edged sonic envelope of the environment—raised the sensory impact of this production a notch or two.

The lighting design by Stephanie Anne Johnson was as unflinching as the grey concrete stage: hard, almost industrial lighting illuminated the actors clearly while adding stark shadows and sharply-defined profiles, which were not lost on the acting talent.

Costuming, by Luther Spratt, was pretty close to period for the most part. Costuming also represents the aspect of the production with which this reviewer was least satisfied. Working men’s clothes should look like working men’s clothes: wrinkled, sweat stained, maybe soiled. Also, when the cast is singing about not having visibility to their next hot meal, their clothes should map to that message. This material requires that the audience be able to see, simply by looking at the costumes, who are the good guys and who are the bad guys. That message was muddled in this production.

The casting was uniformly good. The production felt the slightest bit under-rehearsed and some of the acting choices could have been better considered. Hopefully these rough edges will smooth out as the run progresses. Also, the actors felt a little unsure about using pauses to let the text/plot breathe a little. The result, while accompanied by solid skill to be sure, was a tad too rushed and lacked the tentativeness and hesitancy with which people approach real conversation, especially when tough, unsparing topics are on the table.

Stage management was tight with snappy entrances, cues, and exits. The acoustics of the garage setting paid a premium to those actors who enunciated well.

Props were appropriate to the message and the set design, as it were, was spare, solid, and simple: a single wooden chair, a large wooden cable spool, and a wrench for a gavel. The effect, like the play itself, was industrial and hard-edged.

Overall, I liked UTP’s version of Waiting for Lefty, and recommended it as an SFBATCC “Go See” production.  Looking at the production as a whole—the text of the play, the messages within it, the energy and craft of the acting team, and the care taken by the creative team—Waiting for Lefty is a solid production of an important period piece of American history.

Tickets are available online at http://www.ubuntutheaterproject.com

Run time: 45 minutes with no intermission.

Mr. Neely is a huge fan of Tejava!