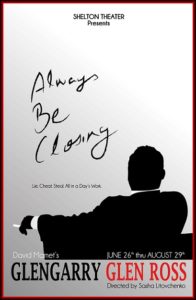 Winner of the 1984 Pulitzer Prize for drama, Glengarry Glen Ross is David Mamet’s sizzling and gritty, claustrophobic play about a quartet of self-loathing real estate salesmen in Chicago during the mid-1980s. The 1992 film featured an all-star cast and was critically acclaimed. While there is much to be said about the art of live theatre, it would be wise to keep any comparisons to the film out of mind.

The title of the play (and the plot, really) is derived from the two real estate properties mentioned: Glengarry Highlands, a real estate development currently being sold, and Glen Ross Farms, a previous crème del le crème real estate development. A sales contest pits the salesmen against each other. Driven to desperation, they resort to manipulation, bribery and even burglary and theft to keep their jobs. The dog-eat-dog action that ensues is intense, laden with F-bombs, and brings with it all the intensity of life in a pressure cooker.

Mamet came to the public’s attention with plays including, American Buffalo, Speed the Plow, Oleanna, and Cryptogram. Considered a classic of 20th century theater, Glengarry Glen Ross shows Mr. Mamet at the top of his game – a key reason this play has become a regional theater staple.

So in a nutshell, how was the Shelton’s version of the show? The actors do a serviceable job with the dynamic script that’s full of rapid-fire dialogue, and the technical aspects largely delivered their intended results.

The set in the small footprint Shelton Theater were quite effective. A Chinese restaurant, the focus of the first few scenes of the production, boasted beautiful red upholstery and was accented with maple-stained wood trim.  With clean lines, the restaurant set was complemented by a simple black lacquer table and white curtains.  The real estate office’s white walls included a well-painted marble effect that transported the audience right into the twisted business.  Both sets leveraged the Shelton Theater’s size and geometry to good effect. The sets were designed, built, and painted by Matt Shelton and Adam Stowers. (Score: 8/10)

The set was carefully built to capture the essence of the environments displayed. The resulting effect was more than your run-of-the-mill set—simple yet effective. The brown stair step leading from the street into the office struck a somewhat incongruous note. (Score: 7/10)

To the credit of Stage Manager, Muriel Shattack, the action behind the scenes was smooth. The backstage crew controlled the on-stage chaos with near perfect set changes and actors made entrances promptly. Lighting and sound crews were on their mark and associated cues were tight. (Score: 8/10)

Sound design was by Alex Boyd. At the outset, Mr. Boyd’s music and mood effects inside the Chinese restaurant worked well. In contrast, the sound effects and music underscoring the key set change were overwrought, taking the audience away from the moment. (Score: 5/10)

An important facet of a strong production is the use of effective props. Shelton’s prop designer invoked realism with matching turquoise office chairs, harmonious dishes and tea set accessories, as well as a file cabinet full of…files. By-and-large, everything was in its proper place and presented a well thought-out design. One inconsistent note was a tea bag, seen floating in the bottom of a glass coffee pot. When an actor says something to the effect that he hasn’t had a cup of coffee all day and pours same from a glass coffee pot containing a floating tea bag clearly visible to the audience, the result is unimpressive.  (Score: 7/10)

Costumes were realistic, pressed/ironed as appropriate and well presented. Each slimy salesman wore immaculate, pressed suits fitting for the 1980s. Shoes were stylish and polished. Style/design elements were well considered and selected.  (Score: 8/10)

Mamet challenges directors of every experience level. Director Sasha Litovchenko succeeds for the most part. Pacing was a tad uneven in spots. It also felt like a bit more work needed to be done on the acting choices made in some of the scenes, particularly in Act 1 Scene 1. Blocking and movement were satisfactory. (Score: 5/10)

One of the greatest challenges of the space at Shelton Theater is its low hanging ceiling. Still, the lighting design by Colin Pope captured the essence of the script for the most part. The lights were hung evenly, but on more than one occasion actors were performing between lights, in a bit of a dim zone. (Score 6/10)

Good casting, nice mix. The seasoned actors did a good job with the material. Mr. Shelton’s work in particular was outstanding. The Eastern European accent of one of the other actors was a bit thick at times. Philip Estrin avoids clichés and nails the role of down-but-not-quite-out Shelley Levene. Matt Crawford as Moss, looks straight out of Central Casting as the schemer who launches the idea of the salesmen robbing their own office. (Score: 8/10)

The Shelton Theater’s production of Mamet is a solid presentation of a great American classic. Overall, Shelton paid better-than-average attention to the technical aspects of the theater. (Score: 7/10)

Shelton Theater’s iteration of Glengarry Glen Ross works incredibly hard to sell the intent and intensity of Mr. Mamet’s work. For the small audience on Friday night, Shelton largely delivered the goods. If you like drama, go see this solid take on an American classic. (Score: 7/10)

Show times and Place: Thursday – Saturday 8:00 pm.  Box Office and Bar open at 7:00 pm. The Shelton Theater is located at 533 Sutter St. between Powell and Mason, in San Francisco.