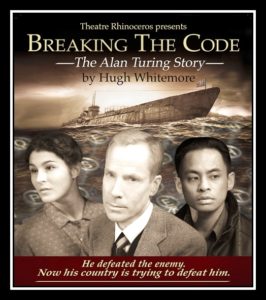 NOTE: The following commentary is focused primarily on the production, direction, and technical aspects of theater and performing arts.

These days you can’t swing a secret decoding book without hitting a play, biopic, or documentary about Alan Turing. There is no question that Mr. Turing (1912-1954) was a mathematical prodigy whose genius left a legacy that remains scientifically relevant to this day. But it is the circumstances of his too-short life that continues to intrigue, inform, and inspire.

The hit revival of Hugh Whitemore’s 1986 Breaking the Code by Theater Rhinoceros at the Eureka Theater masterfully captures Turing’s professional assent, first for his contributions in developing computer science as we know it then later for his pivotal part in breaking the Nazi’s Enigma code that helped the Allies win World War II to his subsequent tragic fall from public grace for being homosexual. Whether by nature or necessity, Turing was a complex man who tried—and ultimately failed—to compartmentalize his life, leading to his apparent suicide in 1954. Directed by and starring Theater Rhinoceros Artistic Director John Fisher, this show is must-see drama.

This production is not “gay theater” nor is it a fringe work designed to incite people with too much anger for the world to scream Oppression! on their Facebook and Twitter accounts, typed furiously on their Taco Bell-stained laptop keyboard. This production ofBreaking the Code is quality theater of the first rank that could be picked-up and dropped unchanged into a venue like the SF Playhouse, Marin Theater Company or Aurora Theater.

Too many community and regional theaters try misdirect the audience from lackluster acting and direction by self-conscious sets or visual effects. The set by Jon Wai-keung Lowe is ingeniously simple and forms a perfect backdrop for the events of Mr. Turing’s life, emphasizing the theory that it’s the acting that makes the play. (Score: 8/10)

Dave Gardner’s set construction was well done and inserting doors into the blackboards stage left and right was a clever addition.  (Score: 7/10)

Congratulations to stage manager Valerie Tu (soon to be interning at Chicago’s fabled Steppenwolf Theater) and her assistant Cat Howser for spot-on actor, lighting, and sound cues. Of note was having the actors re-position the furniture and props in semi-darkness between scenes. Mr. Fisher in particular seemed to be channeling Fred Astaire as he deftly and precisely accomplished his tasks during the scene changes.  (Score: 8/10)

Colin Johnson’s sound effects were largely good although it was confusing when the office/typewriter effects weren’t always audible when the door into Mr. Turing’s room was opened. (Score: 7/10)

John Fisher’s props are spare but period proper and well rendered, an ornament to the acting, not mere set—or actor—decoration. (Score: 7.5/10)

Lara Rempel’s costume choices were first-rate, period proper, and well rendered. Period hose on the ladies was a nice detail, as was the damp T-shirt on Mr. Turing as he finished jogging.  (Score: 8/10)

Clearly a well-rehearsed production, the direction was solid, professional, and well executed with twice the much-deserved applause because the director is also the lead actor. It is much more difficult to direct yourself than others but John Fisher did it seamlessly. Pacing was nice—brisk but not breathless. The show also used pauses well—a rare dramatic art these days.) (Score: 8.5/10)

Jon Wai-keung Lowe and Sean Keehan’s lighting design was subtle and largely unobtrusive but with one hitch: on more than one occasion actors were performing between lights in a dim zone. (Score: 7.5/10)

The gentlemen in the cast were solid and Mr. Fisher was simply outstanding. New or seasoned acting students should buy tickets to study a professional at work.

Frank Wang played hustler Ron Miller obliquely as a man made of angles and edges, each sharper than the last.  Val Henrickson, as Turing co-worker Dillwyn Knox, provided a witty performance as the neighborhood and cultural oracle of bad things to come.

Particularly enjoyable was Patrick Ross as empathetic detective Mike Ross, who seems genuinely hurt that Mr. Turing has blurted out a story revealing his own homosexuality, leaving the lawman no choice but to investigate Mr. Turing and charge him with gross indecency. The scene is hard to watch and the audience was silent save for the collective sign of 60 souls seeing a man put himself squarely in the crosshairs of the law.

Heren Patel assumes two roles in the show: an awkward school boy and a Grecian guy-for-rent whose stream of Greek-speech is both impressive and quite funny.

One acting note: when an actor is supposed to write something—in this case it was an address–on a piece of paper, the actor should quickly write the address down, not just apply pen to paper and scribble. Details always count, but especially so in a quality production like this.  (Score: 8/10)

From lights-up to lights-down, this fast-paced production is how quality theater is done. This is not a hard code to break: run, don’t walk, to see this show—and bring your friends.  (Score: 8.5/10)

Breaking the Code by Hugh Whitemore, directed by John Fisher.

Run time: 2:10 with one intermission.