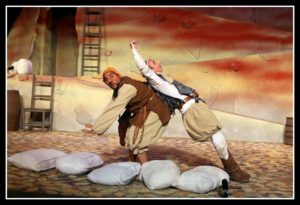 Ron Campbell has pulled off the near-impossible— he convinced the large opening-night crowd at Marin Shakespeare’s debut of their witty adaptation of Don Quixote (by Peter Anderson and Colin Heath) that he was both a man and a horse. Truly no mean feat, that.

Then again, Mr. Campbell is no mean actor. A man, a wooden broom and a watering can? Gesticulating arms and pumping legs? An energetic and comedic recitation of a classic text invigorated with new life? He’s certainly all of that, to be sure. But to stop there would be to damn with faint praise.

Instead, one simple phrase comes to mind: theatrical magic.

Mr. Campbell’s physical comedy gifts are so sublime that one could not help but believe that he was in fact Quixote himself. And Rocinante, the horse. Or both at once, in action on the stage. Mr. Campbell’s unquenchable dedication to seeing, feeling and embodying the evolving demands of each succeeding microsecond of the script and character represents a master’s thesis in acting.

Ably supporting Mr. Campbell was John R. Lewis as everyone’s favorite squire Sancho Panza. Panza translates literally in English to “belly” or “paunch”, and while Mr. Lewis was indeed suitably paunchy, he brought a world-weariness combined with a rich sense of humor and formidable physical comedy chops to a role too often played to its lowest common denominator. Solid marks for Mr. Lewis.

The play, making its U.S. debut, is ably directed by Ms. Lesley Schisgall Currier in a production that appears to a take on elements of the Commedia dell’arte style: spare sets, masked actors (thanks to the artistry of Mr. David Poznanter), and standardize costumes. Paired with hand-selected segments of the text by Miguel de Cervantes, the show unfortunately succeeds in feeling a bit like the books upon which the play is based— a bit tedious as the end draws neigh. The show starts out grandly and the first act moves quite briskly. The second act? Not so much. By the end of the show it felt somewhat like a long visit by a good friend: you’re at once delighted to have been so entertained but wish the evening’s festivities would wrap-up.

Ms. Currier kept the set design simple and even spare, via the able design of Mr. Jackson Currier. Again, this may be intentional on her part vis-à-vis Commedia dell’arte. The back wall of the set is painted to appear as a library, featuring shelves upon shelves of books. This effect works well in Act 1, Scene 1, but once our hero had left his house in search of adventure, the library wall felt incongruous. (Score: 6/10)

Set construction was solid, as the ramped “mountain” in center stage played host to a small army of people. (Score: 8/10)

Stage management (from Gillian Confair) on opening night can sometimes be tricky as actors and technicians all work through opening night jitters. Such appeared to be the case here, with a few tardy scene transitions and actor entrances. Light and sound cues, however, were prompt and unobtrusive. (Score: 6/10)

Sound levels suffered from some of the natural vagaries of outdoor theater: the actors’ voice levels dipping when they spoke off-axis to the audience, etc. The sound system speakers need bolstering, perhaps something along the lines of a couple of folded 18-inch speakers or a subwoofer to add bottom-end power to the mix. Body microphones would also have added additional presence. (Score: 5/10)

Props (from Joel Eis) were used only as needed and expertly rendered. (Score: 8/10)

Costumes (from Maria Chenut) tended toward a universal tan/brown in color, but were well-crafted. Care was obviously taken to bespoke the actors professionally. (Score: 8/10)

The physical comedy scenes were well-rendered, if in need of a touch more rehearsal to make them appear a bit less, well, rehearsed. Comedic impact of the text would have benefited from tighter cue pick-ups and brisker tempo. No one knows the physical limitations of this stage better than Mr. and Mrs. Currier, so blocking was universally good throughout. (Score: 6/10)

Lighting, like sound, can be a tricky beast outside, even in an amphitheater set below local ground level. A slightly more consistent, balanced lighting plot would have made the visual aspects of the work come off more seamlessly. (Score: 6/10)

Full marks to Mr’s. Campbell and Lewis, as previously mentioned. The rest of the cast was competent and delivered reliable performances. (Score: 8/10)

A solid, well directed new adaptation of a classic work which benefits from the efforts of one of the best physical comedians in the Bay Area. Outdoor theater comes with built-in technical challenges which were, to a large degree, successfully navigated. (Score: 7/10)

A good outdoor effort of a version of Don Quixote which this reviewer hopes will benefit from a bit of a duration trim on its way to becoming a theatrical staple, and a tad of tempo tightening during its current run.  The play was very, very well-served by the addition of Mr. Campbell and Mr. Lewis. (Score: 7/10)