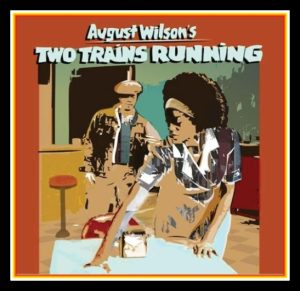 Two Trains Running is Mr. Wilson’s seventh effort in his ten-part series of plays entitled The Pittsburgh Cycle. The play was first produced by the Yale Repertory Theatre in New Haven, Connecticut, and later opened on Broadway in the spring of 1992 at the Walter Kerr Theatre. The version I’m reviewing is in The City now and is presented at the Gough Street Playhouse and produced by Multi Ethnic Theater in association with Custom Made Theater.

The play gives us a complex story based on the lives of ordinary people, a volatile turning point in American history. The location is Pittsburgh, Pennsylvania in the racially charged world of 1969. Mr. Memphis Lee’s threadbare cafe is a regular stop for neighborhood folks all trying to understand the cultural maelstrom of the late 1960s. The regulars do their best to comprehend the swirling tides of change, but don’t always get the results they intended.

As the play begins, the city block on which Mr. Memphis’s diner is located is due to be torn down in a city renovation project. One of Mr. Memphis’ regular customers is the rich undertaker across the street from Mr. Memphis’ café. The undertaker urges Mr. Memphis to accept his offer to buy the cafe, but his price is unacceptable to the stoic Mr. Memphis. He’s been swindled out of property before and he’s determined to stand his ground this time, and get what he thinks his property is worth.

Risa is the only female in the cast. A waitress of quiet dignity occupying the still point in this play, she has self-inflicted cuts on her legs, self-mutilation as a fence between herself and men. Hambone is a mentally disturbed man who seeks comfort in the friendship Risa shows him. He speaks infrequently but when he does it’s one variation or another of the phrase, “He gonna give me my ham. I want my ham!”

The senior character of the play is Holloway. He has seen it all and his role is steady anchor, neighborhood philosopher, and ardent proponent of a legendary 322-year-old woman prophet down the street. Although never seen, she radiates a strong influence over the actions of many of the characters in the play, and serves as a reminder of the heritage of Black Americans.

The set design—that of a scruffy café so much a part of neighborhoods everywhere—was satisfactory. The turquoise booths were period perfect. The bare bones kitchen also fitting. (Score: 5/10)

Unpainted plywood here-and-there underlined a business managed with small dollars and ‘just enough’ repairs. Set construction showed care. Making a set look down-on-its-luck without making it look slapdash is harder than one might imagine. The set designer/builders (Lewis Campbell and David Hampton) did so here. (Score: 6/10)

Cues were solid and well timed, as were actor entrances. Although technically a directing note, actor exits should be quicker in order to drive the play forward. (Score: 5/10)

Props were period and detailed. Even though no one in the play ate anything requiring catsup, the always ubiquitous red plastic catsup dispenser appeared one-third full. The bowl of beans eaten by Hambone were appealing, as was the coffee dispensed by Risa. (Score: 7/10)

Costumes were period 1969 in look and nicely selected (especially those for Wolf.) Shoe selection was nice. Accessory selection was also good.  A bit more attention to fit would render some costumes perfect. (Score: 5/10)

As directed by Lewis Campbell with Esperanza Catubig assisting, Two Trains Running runs 3 hours including one intermission. The running time is important, as slowness of pacing was an issue on opening night. This play requires pacing more like everyday life, with the dynamics of neighbors talking with neighbors they’ve known for years; that is to say briskly, sometimes obliquely, with awareness of personal quirks and hot buttons, and with every intent to find or deliver a message, a joke, a jab, or a cut.

The actors cast in this production were certainly more than capable of doing this sort of work, but on opening night the presentation was too muted. (Note: It was extremely hot in the theater this night and I’m sure that had an impact on the actors. I know it had one on the audience.) (Score: 5/10)

Lighting design was satisfactory with one note: the kitchen was never lit, not even by a single bulb. This seemed incorrect.  (Score: 5/10)

Solid acting highlighted by Fabian Herd (Wolf), Vernon Medearis (West), and Stuart Elwyn Hall (Holloway.) All three actors demonstrated a keen ability to do what so many actors fail at: to listen to what is being said by other actors, instead of simply waiting for their turn to speak. These gentlemen delivered acting in considered gradations, rendering layered performances which would hold them in good stead with notable theaters across this country.  (Score: 7/10)

A good effort to present what will no doubt become an American classic. More pacing, quicker exits, and a tad more attention to costume fit would polish the production. The production crew needs to think more about patron comfort on hot August nights; additional fans would help make the tight confines of the Gough Street Playhouse more amenable to sellout audiences. (Score: 6/10)

There is little doubt August Wilson has a ‘reserved seat’ in the pantheon of Greatest American Playwrights. Seeing Multi Ethnic Theater’s production of Two Trains Running shows why. (Score: 6/10)