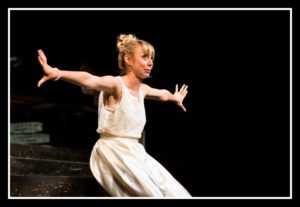 SF Playhouse has learned a secret uncovered by few community and regional theaters: big musicals in the June 1 to Sept. 1 time-frame can make serious money. Especially in tourist destination cities or areas.

Raising a vodka gimlet to toast their own obvious success with this secret (as witnessed by the near sell-out audience last Saturday night), SF Playhouse’s production of Company, by Stephen Sondheim and George Furth, went down as smooth as a cocktail and left many patrons with a satisfied glow as a result.

Company is not your typical all-singing-all-dancing musical. In fact, there’s little enough dancing in the show—this is a musical with the emphasis on the music and the singing.Company is not a sort of A-to-Z straight-line plot, either. The show is composed of a variety of scenes that taken as a whole tell our tale.

The scenes/music/singing all revolve around the dating / marriage / commitment / relationships of one newly 35-year-old man named Bobby, played with almost detached studied aplomb by Keith Pinto. A perpetual bachelor and bon vivant, Bobby, and his married friends, are celebrating his birthday; that, in essence, is the story line.

As directed by SF Playhouse co-founder Susi Damilano, Company eschews the full orchestration and electric guitars of most productions, relying instead on two pianos, located stage left and stage right. Music Director Dave Dobrusky presides over one of these pianos and surely conducts his charges. The effect of this two-piano strategy is more personal, less grandiose than a full or even partial orchestra.

The set design by Bill English and Jacquelyn Scott is elegant on many levels because the set is built on, you guessed it, many levels. The scenic rear projections as designed by Micah Stieglitz add a powerful theatrical touch to the proceedings. The sound design by Anton Hedman works well, as does the lighting design by Michael Oesch.

Stage management by Tatjana Genser is tight with sound and light cues snappily in place. Costume design by Shannon Sigman takes full marks—elegant, well designed, and nicely rendered. All the actors looked darn good in Sigman’s work. The props design is fine—what props need to be in place are in place, work well, and underscore scenes nicely.

Choreography by Kimberly Richards, ably assisted by Morgan Dayley, is sharp and professional, given the limitations on dancing room due to the multi-plane set.

Let’s move on to the acting. Overall, the casting and associated acting of this show is a little bit uneven, but, to be sure, the acting is in general rendered with obvious verve and commitment.

I do wish we’d gotten to see a bit more of Abby Sammons’ (Jenny) good work. This is a talented lady.

Then there is Monique Hafen as Amy.

Can I say, “Oh. My. God.” in a review? There’s nothing else to say. To say Hafen nails the anxiety, the intensity, the comedy, and the speed-singing of Amy, who may not be getting married today, is like saying the Mona Lisa is “a pretty, sort of, mostly OK drawing.” Once Hafen starts acting and singing, almost all the other cast members turn to specters at worst or supporting actors/singers at best. Hafen is the most exciting and engaging musical performer in this cast, bar none. If she doesn’t have a suitcase permanently packed for Broadway by her home’s front door she’s doing something wrong.

Another notable performance is rendered by Joanne (Stephanie Prentice). Never far from a bar or a drink, the fragile, emotional wreck that is Joanne has one of the most powerful songs of the night (“The Ladies Who Lunch”) and Prentice nailed it cold.

Full marks must be given to Morgan Dayley in her character as a flight attendant who spends as much time looking up at bedroom ceilings as she does looking down airplane aisles. Dayley gives the role her all and does so without stepping into cliché or camp. Watch this performer, she is going places.

“Side by Side by Side/What Would We Do Without You?” is, I will admit, one of my favorite dance numbers and SF Playhouse did it with gusto. Overall, the music and singing were quite good.

All in all, SF Playhouse’s Company is a fine night on the town.